The 1930s weren’t dominated by a superstar like they were in the ’20s. Many people say that the “Golden Age of Sports” had come to a close when Bobby Jones retired in 1930.

Advertisement
Sports in the 1930s was still as exciting as ever, with many records getting smashed. We also saw two extremely talented Joes: Joe Louis and Joe DiMaggio.

As with everything else, The Depression took its toll on sports. Most everyone took a salary cut and all ballpark renovations were suspended. There was even talk of postponing the Winter Olympics.

Because of the shortage money, sports became increasingly commercialized. Everyone was looking for a way to make an extra buck. Sound familiar?

And no one will ever forget the triumph of Jesse Owens, winning four gold medals in the face of Hitler and his Aryanism at the 1936 Olympics.

And he wasn’t the only one. Joe Louis lost to and then came back again to beat Max Schmeling in a virtual USA vs Germany pre-WWII battle in the ring. The Louis-Schmeling fights were some of the most important in boxing history. Advertisement
In America, baseball was the most popular professional team sport in 1930. If boxing wasn’t as popular they were very close. Babe Ruth saw his salary increase to an unbelievable $80,000. When told that his salary was larger than the President’s he joked, “Well, I had a better year than he did.” It’s hard to argue with him.

Bill Terry led the National League with an amazing .401 batting average, while Al SImmons led the AL with a .380 average. Hack Wilson led all major league hitters with a then NL-record 56 home runs, the most since by any player in either league Babe Ruth hit 60 in 1927.

College Football All-Americans were led by Frank Carideo of Notre Dame and Leonard Macaluso from Colgate. Alabama defeated Washington State 24-0 in the Rose Bowl (which was actually played on January 1, 1931).

Amazing amateur Bobby Jones won the Grand Slam and then promptly retired. Interestingly, he made a wager that he would accomplish this feat, and reportedly won $60,000 on it.

Max Schmeling beat Jack Sharkey for the heavyweight title in front of 75,000 spectators.

For the first time in over 15 years, Babe Ruth was no longer a New York Yankee. However, he did not stay unemployed for long. The same day of his release, the Boston Braves signed him.

1935 was a very special year for baseball because it ushered in the beginning of night-time baseball. On May 24, President Franklin D. Roosevelt turned on the lights at Crosley Field, for a game between the Reds and the Phillies in Cincinnati. It’s difficult to explain the significance of this event, but let’s just say it completely revolutionized baseball.

Five days before retiring, Ruth goes 4-4 with three home runs and 6 RBI. It would be his last hurrah.

The Chicago Cubs went on an amazing tear, winning 27 games in a row at the end of the season to steal the pennant. The Detroit Tigers bashed their way to the American League pennant, behind Hank Greenberg.

Even though Greenberg was injured by a pitch that ended his World Series, the Tigers went on to win their first MLB championship despite four previous tries.

After the season, MLB assumed control of the Boston Braves, who were virtually bankrupt.

The boxing world was shaken by one of the most stunning upsets in sports history. James J. Braddock, with 24 losses to his name, defeated world champion Max Baer to take the world title, by a fifteen round unanimous decision in New York. 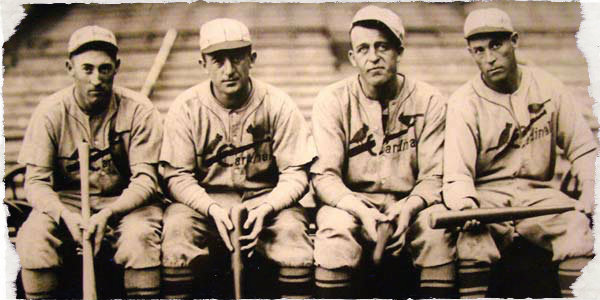 While the mid-30s were owned by guys like Ott, Foxx and Dean, the late 1930s introduced three guys who would shape the next decade: Williams, Feller and DiMaggio.