There was a musical revolution going on in the 1950s, much of it carried on the back of the electric guitar. Fender, Gibson & Gretsch led the way.

Kids didn’t want to learn piano or violin anymore. Those were instruments for fuddy-duddies. The new age kid played guitar and made his or her parents really angry with all that loud rock ‘n roll music.

But those kids weren’t just making up the rock ‘n roll themselves. They had loads of new, young professional recording artists that specialized in this new sound. And since ’50s kids had access to spending money and records, the new sound spread like wildfire.

To create this new sound, manufacturers improved their equipment substantially. Fortunately kids everywhere were coaxing their parents into buying them a guitar, thus injecting loads of money into equipment-makers’ R&D departments.

It was a golden age of sorts for classic hollow-body electric guitars. Acoustic guitars had been around for about 100 years already and hadn’t changed a whole lot.

The lap steel guitar was a very popular item. Usually played with a slide, this guitar sat flat on a table and was played horizontally. Electronic instruments were in their absolute infancy, limited to such basic tasks as providing a simple background beat for organ players (see the picture of the Wurlitzer Side Man drum machine below).

Banjos, mandolins and harmonicas were also very popular. Drumsets (called outfits at the time) were usually a few pieces and a cymbal or two, nothing really extravagant, just enough.

The most popular musical instrument manufacturers in the 1950s include:

Although many improvements were made in recording equipment and instruments alike in the 1950s, it paled in comparison to the inventiveness that was to come in the 1960s.

Learn more about 1950s instruments by reading the very interesting text in the vintage catalog pictures below. 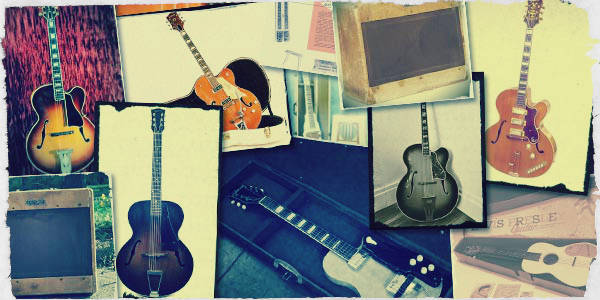