This the the era in which the owners of RetroWaste grew up! And we still have most of these toys in a box somewhere! Ah, who are we kidding? We still play with them!

The early 1980s had a bit of a 1970s hangover, where most of the toys where very similar to toys that already existed in the 1970s. The smaller-sized Star Wars action figures of 1978 were so popular that almost all action figures changed to the smaller size by 1982.

Remote controlled cars and trucks were getting much better in quality and they were getting cheaper too. But all heck broke loose in 1984 when toy manufacturers figured it all out. The key to toy sales, they discovered, was licensing. Licensing was nothing new, but seemed to lose some of its power in the seventies.

1984 saw an explosion of new toys like Cabbage Patch Kids, Masters of the Universe, Transformers, Care Bears and many different kinds of awesome talking robot toys. The handheld electronic game was also providing hours of fun for kids of all ages.

Video games in the 1980s grew from basic Atari games all the way to the Nintendo NES video game system. The progress video game manufacturers made in the 1980s is impossible to explain in words. Traditional toy sales rose slightly in 1982. It was generally a year of spotty sales, company acquisitions and several bankruptcies. However there were a few bright stars, including video games and licensed playthings.

Several other companies joined Atari, the leader in the video game arena. Many of them specialized in game cartridges that could be played on a home TV screen! The most popular games were those licensed from coin-operated arcades, like Donkey Kong and Pac-Man.

For the first time, board games slowed as people preferred the sophisticated video games. However one board game, Pente, was hailed as the biggest rage since backgammon.

Deely bobbers — squiggly antennae attached to a headband with glittering balls, stars or pinwheels bobbing on the ends — became a nationwide sensation.

GI Joe re-enlisted after a 7-year “rest and recuperation.” The totally redesigned GI Joe action figures were much smaller and did not have removable clothing.

For the second consecutive year, there were no hot-selling items or new product trend. Lack of consumer interest in new products and late shipments of some of the new high-tech toys had a negative effect on the industry. One of the few best-selling new toys in 1987 was PoGo Bal, a variation on the pogo stick, made by Hasbro. PoGo Bal is a circular disc that has a rubber ball attached to the top and to the bottom. A person stands on the platform, hugs the top ball with his or her feet and hops.

Traditional toys, such as stuffed animals and board games fared well in 1987. Two of the year’s most popular products were Barbie and G.I. Joe. Barbie became the lead singer in her own rock band and G.I. Joe became a space traveler with his own space vehicle launch complex.

One cool toy I had when I was a kid that was from 1987: Captain Power. Designed by Mattel, “Captain Power and the Soldiers of the Future” toys were made to interact with the television show. During a segment in the show, children shoot light beams at characters on the TV from handheld spaceships and the characters appear to shoot back.

Other high-tech toys introduced in 1987 included the PXL-2000 kiddie camcorder, and Jill, a doll that can pose multiple questions to a child.

Holograms appeared in the toy industry in 1987. They were incorporated into shields of action figures and any other place that needed that extra modern look. 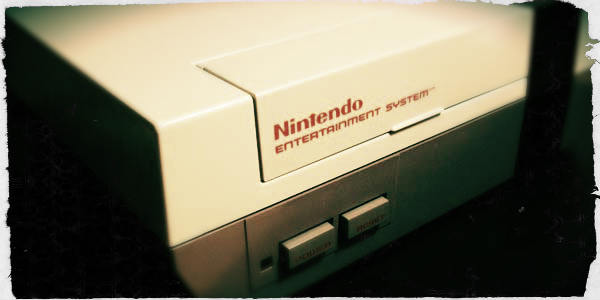 Video games evolved immensely from 1980 to 1989. By the end of the decade most of the games could be played at home instead of the arcade. NES & Atari time!
Advertisement