Sports were as popular as ever in the 1950s. Baseball and boxing were huge, while football and golf were growing.

The Yankees dominated the decade — as did my beloved Cleveland Browns. Rocky Marciano and Floyd Patterson were the boxing superstars of the 1950s.

College football was more popular than pro football in the 1950s. The Rose Bowl between Ohio State and Oregon attracted 98,202 fans. Pro football really start becoming a huge success until it started showing up on television screens in the 1960s.

Rocky Marciano enjoyed a historic, undefeated run between 1952 and 1956. Hockey was becoming more popular as well. Ted Kluszewski was the home run leader in 1954

The New York Giants’ four game sweep of the World Series highlighted a baseball year that also found the Baltimore Orioles back in the recognized majors after being away for over 50 years. The Indians won 111 games, but lost mercilessly to Dusty Rhodes and the San Francisco Giants.

The Philadelphia A’s moved to Kansas City in 1954. The New York Yankees fell short of their bid for seven straight championships.

The largest crowd to watch a game in 1954 was a doubleheader in Cleveland Municipal Stadium, where 86,563 watched the Indians beat the Yankees, 4-1 and 3-2, to clinch the pennant.

Willie Mays won the MVP award in 1954. Bobby Avila won the AL batting crown with a .341 average, but the MVP award went to Yogi Berra.

Minneapolis retained its NBA crown against the determined challenge of the Syracuse Nationals, who forced the champions to a Game 7 before folding 87-80. The series triumph provided the Lakers their third straight NBA title and their sixth in seven seasons.

The Harlem Globetrotters continued to hold the spotlight among professional exhibition teams and drew mammoth crowds for appearances throughout the globe.

Kentucky, unbeaten in 25 straight games, was ranked #1 in the final AP poll for the 4th time in 6 years. But the Wildcats elected not to participate in the NCAA Tournament due to ineligibility issues.

In the heavyweight class, Rocky Marciano outpointed ex-champ Ezzard Charles. In a rematch in September, Marciano KO’d Charles in the 8th round.

In the light heavyweight class, Archie Moore outpointed Joey Maxim in 15 rounds on January 27. He successfully defended his title against Harold Johnson in August.

1954 was the season of Otto Graham. He figured in all of his team’s TDs and highlighted the Cleveland Browns staggering victory over the Detroit Lions, who were seeking their 3rd straight title.

In the championship, Graham rushed for 3 TDs, passed for 3 more and flipped a pitchout for the other.

Ohio was stamped the center of the football world when Ohio State was crowned national champions by the AP following an unbeaten season. Alan Ameche, Wisconsin’s bruising runner, was the college standout player of the year, winning several awards.

UCLA also finished undefeated in 1954 and many fans felt that they deserved the title at least as much, if not more than, Ohio State.

Unfortunately, due to Rose Bowl eligibility rules, UCLA could not play against the Buckeyes in the Rose Bowl, because they had played there the previous rule. Conference runner-up USC played the Buckeyes instead, and lost. College football fans were robbed of what could have been one of the best games of all time.

Football-related deaths rose again, with 19 deaths being charged to the sport — 12 in high school, 2 in college, 2 in pro or semi-pro and 3 in sand-lot play.

One-time Yankee (albeit briefly), Lou Berdette, faced the Yankees 3 times in the 1957 World Series to bring the world championship to Milwaukee. It had been 37 years since a pitcher won three complete games in a series.

Two more franchise shifts were announced during the year and with them the National League lost both of its representatives in New York.

Both pennant races were decided on Monday, September 23. six days before the end of the season.

The Braves and the St. Louis Cardinals had the biggest battle for the ﬂag. It was an 11th-inning home run by Hank Aaron against the Cardinals that clinched the pennant for Milwaukee.

The Yankees were in undisputed possession of first place from June 1st on.

Major league attendance was up almost 3% for the year, with 10 of the 16 clubs showing increases. The American League drew almost 8.2 million. The National League 8.8 million. Wilt Chamberlain from Kansas was unstoppable

The Boston Celtics, featuring Bill Russell, won the Eastern Division, while the St. Louis Hawks won the West. The two teams went a full seven games to decide the championship, but in the end the trophy ended up in Boston.

Paul Arizin of the Philadelphia Warriors notched the league scoring title with 1817 points and 25.6 ppg. The East defeated the West, 109-97, in the 1957 NBA All-Star Game.

With Leonard Rosenbluth paving the way for North Carolina and Wilt Chamberlain leading Kansas, the two teams caused countless barroom arguments over who was best. Fortunately, the two teams met in the 1957 NCAA Tournament.

North Carolina won in triple OT, 54-53 for the national title, while finishing a perfect 32-0.

Detroit made an uphill climb to the professional championship. The Lions’ veteran coach, Buddy Parker, resigned in the training season and was replaced by George Wilson, an assistant. They went into the final game of the regular western division season with starting QB Bobby Layne. Backup Tobin Rote led the Lions to a 21-13 victory over the Chicago Bears to win the western division.

Detroit ended up riding Rote all the way to a championship, beating Cleveland 59-14 in the most lopsided championship game since Chicago beat Washington 73-0 in 1940.

Number 1-ranked and undefeated Auburn, champion of the SEC, was ineligible for post-season play due to NCAA penalties. Ohio State, ranked No. 2 won eight in a row after a season-opening loss to TCU, then won the Rose Bowl. Michigan State, finished their 8-1 season ranked #3.

The most stunning upset of the 1957 college football season was engineering by Notre Dame, which won six of nine games after a 2-8 season the year before. The Fighting Irish shocked Oklahoma, 7-0, in Norman, to halt the Sooners’ 47-game winning streak. Ironically, Oklahoma’s streak had started one week after a Notre Dame loss in 1953. 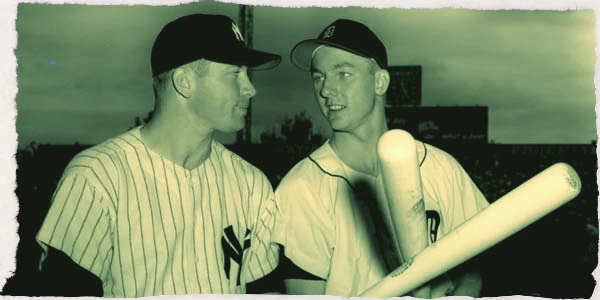 Baseball in the 1950s was possibly the most exciting era of them all. We said goodbye to Ted, Jackie & DiMaggio and said hello to Willie, Hank & Mickey.
Advertisement